At the Shalos Suedas meal I read the History of Admor Tzvi Hersh Morgenstern – Lukaver Rebbe.  It was great.

In 1995 my sister and brother – in –law republished the book of the Lukaver, Ateres Tzvi.  The editor put in a history of the Kotzker family.  The editor put my sister in touch with our father’s first cousin, Menucha Morgenstern-Lahav, who gave the editor pictures of the family for the book,  We did not know that she existed and I thought all of the children of the Lukaver perished in the Holocaust.    Menucha is the daughter of Reb Yehushsua Zelig Morgenstern and sister of Nosson Shacher, see my post on Nosson Shacher – The Chief Rabbi and my Cousin.   In 2007 when we visited Israel, we had her and her family over for a Friday night meal.  It was delightful. 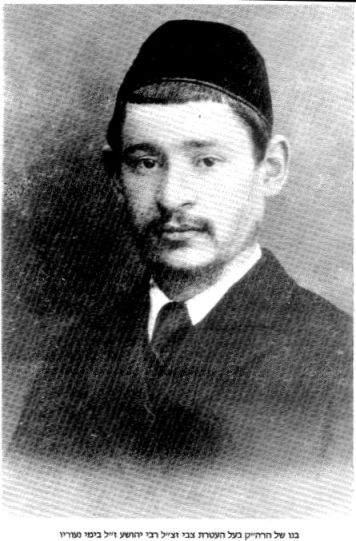 The last page of the family history had a picture of someone I did not know, and always assumed that I will never know this person.  I was looking at the picture and felt a rush of excitement.  I know this person.   This picture is Reb Yehusha Zelig Morgenstern as a student.  Rabbi Yehushua Zelig Morgenstern is  father of Menucha Lahav and Nosson Shacher.  Please look at the post, The Chief Rabbi and my cousin.  Wow.  Please show this to Rabbi Lau.

I told my sister and brother–in-law that they should have put in a dozen pictures and over time I would have linked them all together.

I will translate the history in the next week or two.

Lesson from the Lukaver Rebbe’s History:

Reading the Lukaver Rebbe’s history, something occured to me that I knew but did not put together in a timeline.

1881 – Czarist decrees against Jews making it impossible for a Jew to live a life in Russia.

1881 – start of exodus from Russia  – per Chaim Potok 2 million Jews leave Russia, primarily to the US

1903 – decrees against Jews in Romania

1903 – Theodore Herzl upon hearing about the Kishinev massacre and the decrees in Romania, reluctantly agrees to a British official that the Jews be resettled in Uganda.   He realizies that at the present time, the Jews will not get Israel.  Uganda is only a way station unit the Jews get Eretz Yisroel.  Herzl sole motivation was to save Jews.

1917 – the Russians declare war on Religion and one can barely live the life of a human being, but for sure not as a Jew.

1920 – Lukaver Rebbe passes away, pained by the suffering of the Jews behind the “Iron Curtain” which cut off the Jews of Russia from the rest of Europe.

1937 – the Agudah convention supports the establishment of a State i n Israel, both politically and the P’sak of the Moetses (Rabbinic leaders) of the Agudah.    Reb Zalman Sorotzkin reads the P’sak Halaha form the Rabbinic leaders.

The Jews were doomed in Russia from 1881.  There was no future from this date on.  This spread to the entire Europe in 1939.

2013 – there are Jews in Israel who cannot give thanks to Israel and feel part of a country, cannot pray for Jewish soldiers, cannot appreciate the freedom that was denied to Jews for generations.

Other Events This Past Shabbos:

Last Thursday I missed the first page of the 17th Chapter of Shabbos. The 17th chapter  deals with the law of Tiltul – moving objects on the Sabbath.  Because I missed the first page, and I was in Daf Yomi, the laws seemed arbitrary.  I made a comment about this at the Daf Yomi class.  On Shabbos, I started from the first page of the 17 Chapter and got it.  I understood the laws, the flow of the Talmud.  It made sense.  Sometimes if you learn Daf Yomi and do not fully understand the sources, it seems like nonsense.