Pesach came in for Shabbos to be with my mother. It is always great seeing him. Friday night we stayed up to 11:30 PM talking about Bubby and Zedi Sklar.  Bubbi and Zedi Sklar’s trip to Israel in 1962, Pesach’s trip to Israel in 1960 to learn in Yeshiva.  Pesach got Bubby and Zedi a room at the hotel Tzfania, not exactly a 5 star hotel, but served its purpose.  Zedi wanted to go to Meron on Lag Ba’omer, however knew that Bubbi would not let him go.  Zedi made up with Pesach for Pesach to go to Zedi’s hotel room at 2:00 AM, lightly knock on the door, and Zedi  would come out.   They hopped on a bus to Meron.  Imagine, Zedi sneaking out at 2:00 in the morning.  What would Bubby  think when she woke up and Zedi would be gone all day.  For Zedi it was an Avodas Hakodash and not a tourist trip.  Pesach also with detail talked about his trip from Chicago to Israel on  a two week boat trip aboard the SS Zion, a Zim Lines passenger ship;  and back on a Greek passenger line. As only Pesach can tell a story, we laughed, reminisced, and laughed.

Shabbos morning was a normal Shabbos. Went home to eat and then went to Mayer’s  house to have Cholent for the third time.

At Sholosh Suedas Pesach, Mayer, my mother, and myself washed and had gefilte fish, Matzah, and salad.   I spoke the following words of Torah:

14:  and your heart grows haughty, and you forget the Lord, your God, Who has brought you out of the land of Egypt, out of the house of bondage,

The simple explanation is that you will become arrogant, forget God, you will go astray and worship idols. The Ibn Ezra explains it differently.  You will be come arrogant, you will forget that once you were slaves, forget that once you were poverty stricken, and forget that God provided for you when you were down.  The Ibn Ezra is saying that you will not go astray, you will not worship idols, rather you will remain Orthodox and keep Gods commandments, but your heart will turn to stone, you will not have empathy for your fellow Jews.  This will lead to demeaning other Orthodox Jews, hatred for the sake of hatred, all the while , going to Shul three times a day, even learning Torah, and wearing a big Yarmulke.  How else do you explain many of the disagreements in Israel.  It almost seems that it todays world certain segments of Klal Yisroel forgot there was a Holocaust.

Today is Shabbos Mvorchim.  Chazzan Silber has a beautiful Nusach for the Yehi Ratzon.  I was looking up the English translation and saw that Artscroll explained “Chaverim Kol Yisroel” as ” All Israel becoming Comrades”.   I decied to look further into the translation of “Chaverim Kol Yisroel”.  A second translation not found in any of the English prayer books is that we are joined together like two pieces of metal are soldered together so they appear as one piece but are actually two pieces.  Rabbi Jonathan Sacks translates these words as “so that all Israel may be united in friendship.”  However, the Birnbaum Siddur explained it that all Jews are “knitted together”.  It is interesting that the same words are translated differently, and each while similar have different connotations, which reflect Haskafah, and time of history.  Refer to end of this post to explains the differences in interpretation.

Philip Birnbaum is the highest level, the knitting together, being intertwined.  This  can be explained best by the following story of the Kotzker and his dear friend, Reb Yitzchok of Vorka.  I had heavenly help in finding this story to understand Birnbaum.

At 3:00 PM I went to take a nap and looked for something to read. I found in my closet three pages from a publication called Hapardas, dated January 1968.  Hapardes was a publication for the Torah world by Rabbi Simcha Elberg, first published in Warsaw, then Chicago, and in the later years of his life from Boro Park.  1968 was his 42nd year of publication.  On page 36 Rabbi Elberg had a book review of a new Sefer published by Rabbi Kalman Eliezer Frankel, a Rabbi in Tel Aviv.  The new book’s title was; In the Tents of the Righteous – the branch of the house of Vorka – Sakranovitz.

I will translate a large part of the book review as follows:

The Seraf of Kotzk did not want many Chassidim among the masses; however, Rabbi Yitzchok of Vorka drew the love of the masses to himself. Just like Rabbi Levi Yitzchok TZL of Berdichiv was in his generation (1740 – 1810), so was Rabbi Yitzchok of Vorka in his generation, he looked upon the Jewish people  with the mindset  of “ He (God) does not look at evil in Jacob and has seen no perversity in Israel. (Numbers 23:21).”    These two great people came out of the Bais Midrash of the Rebbi, Reb Bunim TZL, who both illuminated the heavens of Poland, two completely different viewpoints in Chassidus and nonetheless a great love  and an everlasting love existing between the two great and holy individuals

On page 322 in the book,”B’Ohali Tzaddikkim” the reader will find an amazing story from the author. It is worthwhile to recount the story here.

Even though the mindset, the essence, and entire being of Rabbi Yitzchok Vorka was totally  different than  Reb Menachem  Mendel of Kotzk; as the Kotzker  demanded only perfection, without blemish,  Rabbi Yitzchok of Vorka saw the light that shines in each Jewish person.  Despite this they were strongly and faithfully attached

After the death of Rabbi Yitzhok Vorka on the last day of Pesach (1848), the Vorka’s son and successor, Rabbi Menachem Mendel Kalish, goes to Kotzk.  The Kotzker asks have you seen your father in the next world?  The son answers no.  The Kotzker responds – I saw him. In the Kotzker sharpness, the Kotzker relates the following story. “I was in the heavenly world, and I searched and asked the heavenly angels: Tell me, where can our Reb Yitzhok’l be found?  The angels answered, he is in a higher level, that even we are not allowed to enter. I then searched in the level of the Baal Shem Tov and I was told that Reb Yitzchok was in a higher level. I went to the level of the Achronim, of the Bais Yosef and Remah, and also there I could not find my friend. I traveled and entered the level of the Reshonim and could not find him.  I then went up to the level of they holy Amoreim and asked them, tell me, I am searching for Yizhok’l my friend, where is he and where can he be found.   They responded he was here, but now he can be found on the river’s edge which is closeby. I ran with all my might, I passed the field of the “Chakal Tapuchin” (mentioned in the Zohar of the next world), and there I saw a flowing river, and at its edge, your father Reb Yitzchok’l was leaning on his staff and looking into the clear and pure waters of the river. I grabbed his coat and asked, Yitzchok’l my faithful friend, what are you doing here? He answered me do you see this river? These are the tears of the Jews that were shed over the generations and from the tears a river was formed that flows into the upper heavens. I am standing by this river and I am not able to move away.

Rabbi Frankel adds that this is how the Kotzker described to the son of the Vorker  who his father was and his father’s  greatness. No other leader in that generation merited to be described by the great Kotzker, as the true lover of the Jewish people, Rabbi Yitzchok of Kalish, the first Admor of Vorka, TZL.   The story is told by Rabbi Naftoli Citron – youtube, The Kotzker Rebbe, #3 and #4.

This is how Philip Birnbaum translates “Chaverim Kol Yisoel” “knitted together” as the Kotzker and Vorka Rebbes. And this is the model for the Jewish people.

The four interpretations of Chaverim Kol Yisroel are:         1) Artscroll – All Israel are Comrades.

2) All Israel are connected –pieces joined together.

3) Rabbi Jonathan Sacks – so that all Israel my be united in friendship.

4) Birnbaum Siddur – All Israel is “knitted together”.

Each interpretation I believe depends on someone’s outlook towards life, religion, time of history, and relationships.   They are probably all true at times during history.

Artscroll’s translation sounded strange to me. The word Comrades brings up negative images.  Loyal communists were called Comrades.  This implies that Klal Yisroel must all be the same, think the same, and look the same.   Comrades is an exclusionary term, anyone different is not part of us.  Rabbi Wolkenfeld did tell me that in Israel the word Chaverim is used in the Kibbutzim and it means comrades.

The second explanation is like the Satmer. Klal Yisroel is separate parts joined together as in a menorah whose branches are soldered to the base.   This is how the Satmer would translate the word.  The Satmer in his Hagadah says on Yachatz (we break the middle matzah) – sometimes our community has to break off from the rest of Israel.  We must split off.

Rabbi Jonathan Sacks is how most people would interpret the words; however, Birnbaum is on a deeper level. We are bound to one another.  This is more the viewpoint of the Besht, the Kotzker, the Lubavitcher, Menachem Begin, and others. 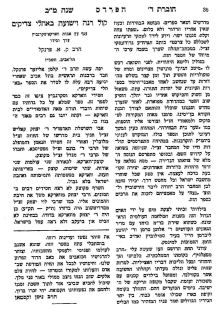 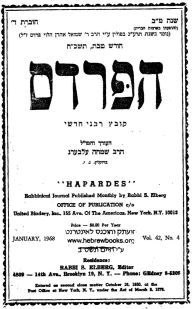