It has been a while.  I hope everyone if fine.  It is a quarter-end at work and I am busy.  But then, I am always busy.

Last Wednesday we had lunch with Kenny and Tzippy who were in Chicago for a wedding.

Shoshana, Danny, Tova Tamara, and Tiferet Tzippora moved to Indianapolis.  They are settling in.

I am trying to get into marathon training.  I ran 6 miles today, not enough.  The weather was perfect at 70 degrees.

Martin– How is your running going.  I am looking forward to December.

Menucha – please send me stories about your father, what he stood for, what he said about his family in Europe.  Why he left Europe, etc. etc.  Write a biography about your parents.  Thanks.

The following is the words of Torah, I developed and spoke out this Shabbos.  I have attached a scan of the sources.

1) In this past Shabbos’s Torah portion – Korach challenged Moshe’s leadership.  Korach initially appears to be motivated by spirituality, however, he aligns himself with bad characters, Dasan and Aviram, the same Dasan and Aviram who were Moshe’s enemies from Egypt.  Who can forget Edward G. Robinson’s great portrayal of Dasan (or Dathan) in the movie, the Ten Commandments.  I read that Edward G. Robinson was the only Jewish actor in the movie. 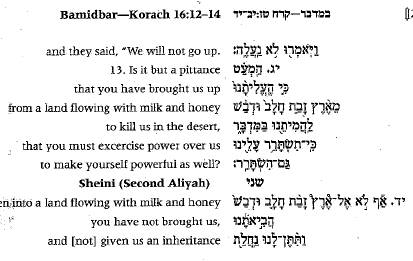 I thought the  word

meant “anger”. I was surprised that Rashi translates it as “distressed” .  Rashi choose to not translate V”Yichar word as anger.  Rashi seems to argue on Targum Onkyls who translates V’Yichar as anger.      Per Rashi, Moshe was distressed, grieved.  Refer to the scanned attachment for Rashi.  It is clear that

by itself does not mean anger.  The source of Rashi is the Medresh, as follows:

Refer to the explanation in the bottom of the Medresh who explains it, as follows:

When someone has an argument with another and is able to respond to his antagonist, the person has satisfaction (he is able to answer the verbal assaults).  However, when the person being attacked – the victim, cannot answer his antagonist, the victim  has pain, grief, and aggravation.  Dasan and Aviram challenged Moshe’s leadership.  They did not appear before Moshe with their attack, so that  Moshe could not respond to them.  Moshe tried to make peace, they turned on him, and got the upper hand.  Moshe was publicly humiliated, embarrassed and he was distressed.

This is the meaning of the word –

I want to add another meaning of the Medresh.

The Medresh employees the words

.  These words imply personal satisfaction and not answering your enemy or being victorious.

I want to say that the Medresh is telling us a comment on  human psyche.  If we are fighting with someone and we answer that person, we have personal satisfaction and we are at peace with ourselves.  However, if we do not answer a verbal assault on ourselves, then we have pain and anguish.  It eats away at us, with negative, negative results. It can take years to forget the hurt.

A personal story to illustrate.

Years ago,  two distant cousins of mine were talking to one another and the older gentleman tried to humiliate his younger cousin.    He said that he does not see how his cousin is a Kotzker descendant, because his cousin was not sharp.  Neither my cousin nor I, who witnessed this exchange, answered these older gentlemen.     The younger cousin was silent in the face of a verbal assault.  He should have said and could have said that the older gentlemen was at one time the Rabbi of a non-Orthodox  Synagogue, that he is not trustworthy, that his business ethics could be questioned, and that it is doubtful that  he served Kosher food in his business to Jewish residents.

It would have been different if my cousin had a ready answer,  but we both held our tongues.   It was true that my younger cousin  does not have the Kotzker sharpness.   The correct answer is that there are many aspects of Kotzker Chassidus and this individual did not embody at all Kotzker Chassidus.  He did have a quick mind, but otherwise was a boor.   This hurt my younger cousin for years