In discussing his Parsha Tzav, Megill focused on the uniqueness of the trope in his parsha, in that it includes a Shalshelet.  The Shalshelet note in the trope in parsha Tzav  is the 4th and final shalshelet in the whole Torah.  What is the significance of this Shalshelet?  From analogizing the shalshelet in Tzav to the other shalsheles in the Torah one learns that the Shalshelet indicates that the person discussed at that point in the Torah has some sort of hesitation or ambivalence as to the situation at hand.  If it were not for the shalshelet we would not know this.  The message is that it is okay to hesitate and have doubts.  But one needs to overcome such hesitation and do the right thing at the end, similar to what the great leaders in the Torah have done, including Moshe, Joseph, Lot, and Eliezer, as indicated by the Shalshelet included in the reading that accompanied their situations as they appear in the Torah.

Kiddush was huge and I saw many friends.  I spoke to Rabbi Wolkenfeld and his wife, Sara.  I updated Sara about her friend, Amy Gross-Tarlow.  They went to Penn together.   Met some new friends.  The caterer was Shmuel Diamond who is the chef at Evita’s.  The chef is a regular by the Chabad of East Lakeview.   There were about 250 people.

Helen Bloch spoke excellently.  She talked about the unique and special aspects of her son, Megill Shmuel Hameiri. He is empathic, kind, and carries with him the Midos of a Jew.  Helen Bloch’s parents were Naftali Glenner’s visual therapist, her father Marvin Bloch was his optometrist.   My mother always took Naftali there for his therapy and Helen remembers her well.  I took Naftali there once or twice.

Helen Bloch’s father-in-law, Shlomo Hameiri, came to Chicago in 2009 for Megill’s Bris.  He spoke at Anshe Sholom about his life experiences.

Shlomo Hameiri’s last name in Europe was Hammer.  He was six years old when the Nazi’s came.  The below biography says it was the Ukrainians.   They went to his mother’s parents house which was right outside Lvov and lived on a small farm where his mother’s parents lived.  Shlomo’s grandfather was a Schochet and I believe a Mohel.

He said I cried twice in my lifetime.

The first time was when the Nazi/Ukranians tortured his grandfather.  As the Nazis/Ukranians were torturing hs grandfather, Shlomo asked his mother, why is Zedi crying?  His mother responded, he is not crying he is talking to the angels.

The second time was when he was on the Exodus.  The Exodus set sail from Marseille.  The British notified the French to lock the port so the Exodus will not be able to travel to Israel.   The Exodus was able to slip out of the port.  On day four when the Exodus was in International waters, the ship hoisted the Israeil flag and Shlomo Hammer ((Hameiri) cried. He had his bar Mitzvah on the Exodus.

My aunt Fay Grinblatt – Noble was also ont he Exodus as a child.  ON one Sunday morning as PBS was playing the movie, The Exodus, I went to her house to watch the movie. With her and her huband, Rabbi Moshe Noble.

I found this picture on the Internet: 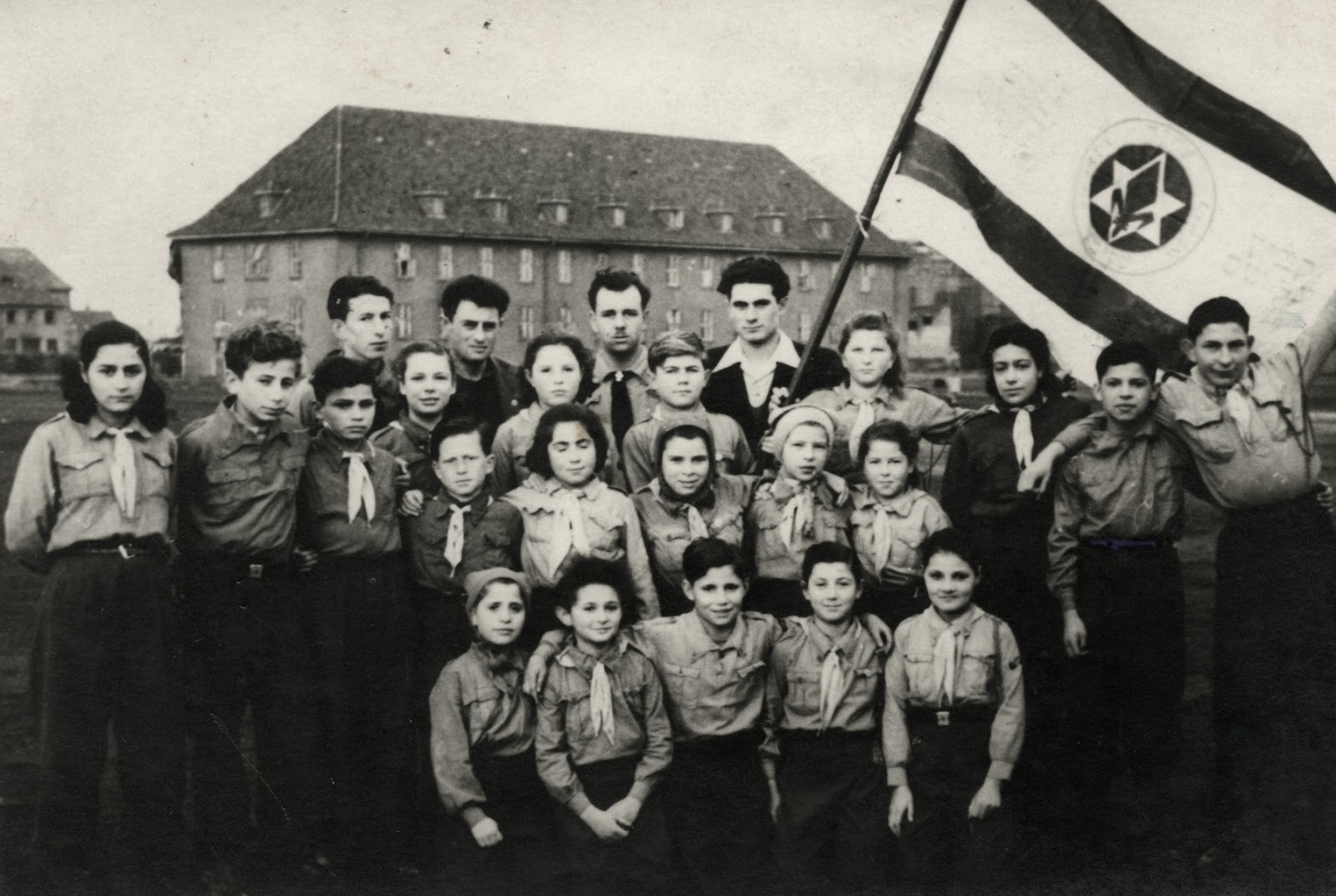 Group portrait of members of the Nitzanim group of the Zionist youth movement, Hanoar Hatzioni.

All of the children had been on the Exodus and had been sent back to Europe. Ziomek Hammer (Shlomo HaMeiri) is pictured in the third row from the bottom, fifth from the right.

Biography Shlomo HaMeiri (born Ziomek Hammer) is the son of Heinrich Hammer (b. 1905,

Stanislawov) and Lola Tempel (b. 1905, Lvov). Heinrich and Lola each had gone to Vienna to study. After they married, they returned to Lvov where Heinrich completed his degree in engineering. Ziomek was born July 13, 1934 in Lvov, Poland. His father was an engineer. In 1940 Henrich joined the Russian army and was sent by the Russians to Leningrad. Ziomek and his mother joined her father Moshe Lev Temple in the village of Uhzedov. A while later, Ukrainians beat and executed him in front of Ziomek and his mother. They also attacked Lola. Afterwards, Ziomek and his mother went to Tarnopol where her sister Rivke lived. There they found Ziomek’s father who had come to look for them. They all were herded into the Tarnopol ghetto where they remained from 1941-43. From Tarnapol, they were taken to a concentration camp, where Ziomek’s parents hid him from the Germans. After three or four months, Ziomek, his father, and mother somehow escaped. They paid a Christian named Stanislavski to hide them in the attic above his pig pen, together with four other people. They could neither stand nor shower; rats crawled over them and they subsisted on dried corn which they softened with snow. The Hammers lived there for nine months. One night in April 1944, Stanislavski asked Ziomek’s father to slaughter a pig. The pig screamed loudly, as they did not know the proper way to kill it. Stanislavski told the family to drink some of the pig’s blood for strength and to run and hide. Later that day, Heinrich left their hiding place and found that Stanislavski had been shot. A few days later the Hammers returned to Tarnopol where they were liberated. Ziomek’s parents decided to return to Uhzedov to recover coins and other valuables that had been hidden with neighbors. They managed to retrieve their valuables but were caught and murdered. Ziomek waited several days for them to return before learning what had happened. For the next few years he lived with his cousin and uncle and, during that time, he attended a Catholic school for about a year and a half. Then his uncle was incarcerated. Ziomek was taken by Jewish soldiers from the Brigade to a Jewish orphanage in Krakow, where he remained for two weeks. He was then transported, along with other children, to Bad Reichenhall, a displaced persons’ camp in Germany. He lived on a Zionist hachsharot, and in 1947 he was sent with a group of children to Palestine on board the Exodus. After the ship was forcibly returned to Europe, Ziomek lived in the Poppendorf and Emden displaced persons’ camps before immigrating permanently to Israel in 1948 on the Aliya Dalet. Before leaving Europe all the children were given new Hebrew names, and Ziomek became Shlomo HaMeiri. Years later, he met another holocaust survivor, Tziporah, on a kibbutz. They married and had two children together.