On Friday January 12, 2018 I sent out the following e-mail to the Rabbis and other I have corresponded with in the past. However, on Shabbos, I spoke, and my speech is after this e-mail. See how I developed what I said below:

I am trying to understand the attached Vort and I apologize for not being articulate on the subject as it is swirling in my head. Have a Good Shabbos and I would like to thank everyone in advance for allowing me to e-mail you.

About 15 years ago I was siting at a wedding and started talking to Reuben Gross from Teaneck, NJ. He mailed me his father’s Sefer. I have attached the face page and the picture of the Mechaber. Over the years I have looked at the Sefer. In this week’s Sedra I am drawn to the attached Vort. What does it mean that they were like sojourners even in Canaan? How did this change their actions? I heard a class this week from Rabbi Wolkenfeld on the life of Dr. Sigmund Freud and his connection to the Jewish people. Did Dr. Freud always feel like an outsider because of the reality built into the cosmos that Jews will always remain separate, and that we have to embrace it just like the Avos did.

The reality is that it is natural for people to want to feel part of the country they live in and be part of the culture. This weekend I will watch some of the football games. I have studied the battle of Gettysburg. Is this opposite of feeling like a sojourner in America?

Rabbi Goldberg – thank you for the Shiur this week. In the last Possuk of last weeks Sedra, (Chapter 6, Verse 1) Hashem’s initial reaction says “Vayomer” and not V’Yidaber. Even though according to Rashi, Moshe is being punished, Hashem does not speak to Moshe harshly. I do like (prefer) the Kli Yakor’s explanation. When I read the Passuk without Rashi, it always seemed to me as if Hashem is semi-apologizing or maybe saying to Moshe you are right and now you will see how I will save the Jews.

On Shabbos at Kiddush I mentioned Rabbi Wolkenfeld’s class on Dr. Sigmund Freud.  Chazzen Silber said the Dr. Freud was one of us, meaning his Neshama was Orthodox, although his lifestyle was not.  He mentioned that the fifth Lubavitcher Rebbe met with Dr. Freud. 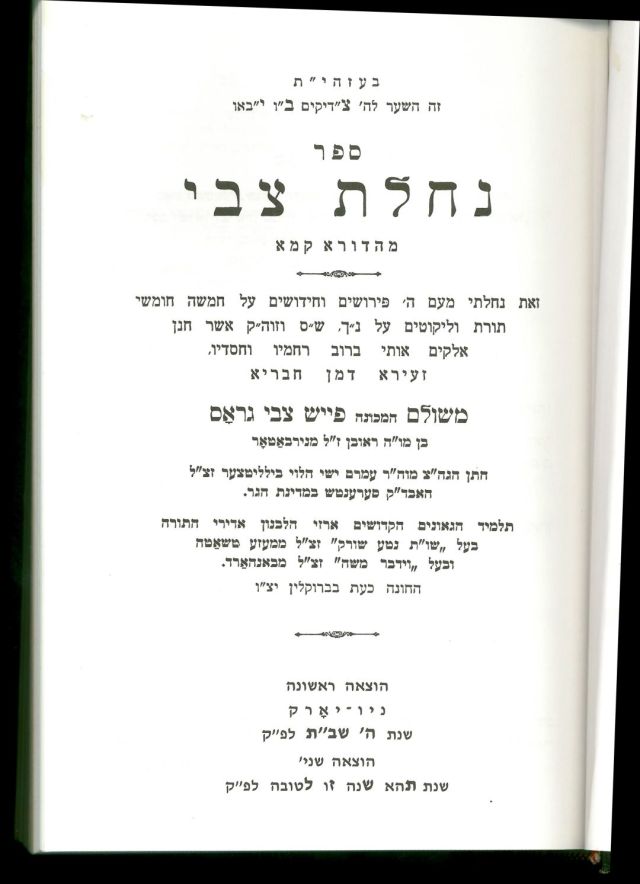 1) I first spoke my last comment in the above e-mail. In Chapter 6, Verse 2 God speaks to Moshe harshly, but is not angry. However, the Possuk before, Verse 1, does not say the God spoke to Moshe harshly. However, you have Rashi saying on Verse 1 that Moshe was punished. I do not have a clear Pshat. I did add that when Moshe said, Why did You do bad to the people, why did you send me”, Moshe was perhaps also saying something else. I told the Jews that I am here to take them out of Egypt and it got worse. This is the Jews first encounter with Moshe. Things did not get better, but get worse. This first impression will live with the Jews forever. Whenever Moshe would say things will be good, the Jews would never be sure, they would be skeptical. First impressions count.

2) I said over Rabbi Meshulim Tzvi Gross’s Vort on Verse 4.

I passed out my above e-mail and attachments and read Rabbi Meshulim Gross’s words. The consensus of opinion was that the Avos remained humble. Although they lived in their own land, they never closed themselves off from the world. They knew that it is their job tis o spread goodness in the world.

3) I spoke out how to understand Verse 5 using Rashi.

No, Verse 5 says, Because of the cries of the Israelites, it is now time for me to remember the covenant promised to Avrohom at the “Bris Ben Basarim” that I will judge the nation that will enslave the Jewish people. Meaning because of the cries it is time to free the Jews and listen to that covenant..

4) I spoke out the meaning of the 4 expressions of redemption. The Sepurno is the most logical Pshat and the one we would say. Rashi seems to say like the Ranban.

Ranban – taking the Jews out of Egypt

Sepurno – Leaving Egypt – at Ramsas when they crossed over the border.

Ranban – The Jews in Canaan will not be a vassal state. Meaning the       Egyptians will not have domain on the Jews even when the  Jews  have their own land.

Ranban – God will judge (and punish) the Egyptians until they say, we give
the Jews a redemption of our souls, because the meaning of Geulah is
like a sale (mentioned by sale of fields and houses in Israel at the
end of Vayikra). The meaning of “we give to the Jews as
redemption for our lives,” means the money and clothes. I
believe the Ranban is explaining the understanding of “and then they
will leave with great wealth” like I did last year. For an
enslaved person to truly feel free is 1) the enslavers are properly
punished, and more importantly; 2) that the enslavers apologize
and recognize what they did was wrong. When the Jews asked for
money and clothes, the Egyptians said, we apologize for what we did
and the money is yours. You Jews earned it for working for 210
years.

4) וְלָֽקַחְתִּ֨י      When you were at Mount Sinai and accept the Torah. Both the Sepurno and Ranban.

5) Chapter 6, Verse 26:
Rashi says Moshe and Aaron were equal. Rabbi Goldberg asked, Moshe was a bigger Prophet. Rabbi Goldberg mentioned Reb Moshe Feinstein , that they were equals in that the each completely fulfilled their purpose in life. Of course Moshe was bigger and the greatest prophet, but both fulfilled their destiny and mission in life.

This question is asked in the Sefer “HaMealitz Benataim”, a translation of Targum Yonasan Ben Uziel into Hebrew and an explanation of the Targum Ben Uziel. https://en.wikipedia.org/wiki/Jonathan_ben_Uzziel

The Sefer “Hamelitz Benataim was written by Rabbi Tzvi Fishbane who lives in Chicago. His son-in-law, Aaron Karman was at the table when I spoke.

Rabbi Fishbane in his Sefer answers the question based on Rabbi Fishbane’s nephew, Dovid Katz.. Based on the Sepurno on Verse 12 that Levi lived longer than all his brothers, taught his grandchildren to understand and teach, and so did Kehas and Amrom, They taught their children greatness resulting in the two great leaders of Israel, Moshe and Aaron.

Based on the Sepurno , perhaps this is the meaning of the Targum Yonasan ben Uziel, that the education of Levi was evident in Moshe and Aaron, it is as if Levi saw them and taught them.

Moments of Time that Changes History:

Parshas Bereishis documents times in history where decisions were made that changed the course of history.  Two recent ones:

Previously, I spoke about another moment in history that changed the slavery in Egypt in this week’s Sedra. Chapter 2, Verse 11 says:

Some time after that, when Moses had grown up, he went out to his kinsfolk and witnessed their labors. He saw an Egyptian beating a Hebrew, one of his kinsmen.

Rashi says on when Moses had grown up:

ויגדל משה AND MOSES WAS GROWN — But has it not already been written, (Exodus 2:10) “And the child grew”? Rabbi Judah the son of Eloai said: the first time it refers to growth in stature, the second time to greatness, — that Pharaoh appointed him to have charge over his palace (Tanchuma Yashan 2.2:17; cf. also Yalkut Shimoni on Torah 166:11).

Moshe was the Jewish nation’s inside man. Moshe was in charge of the house of Pharaoh, meaning he was the chief builder, chief architect and was in a position to ensure that the slavery in Egypt would be tolerable.  Per the Medresh,  he already convinced  Pharaoh to give the Jews a day off and it was Shabbos.  Had Moshe remained in power the slavery in Egypt would have been benign.  Due to two selfish people, evil men, who informed on Moshe to Pharaoh, the future of the exile in Egypt changed and thousands of Jewish babies were killed, the people suffered back braking slavery.  Yes, one or two evil men can destroy a world.

(Over Shabbos, I added, that the other story of Shifrah and Puah  –  Yocheved and Miriam, was one of greatness, defying Pharaoh and perhaps changing history.)

It is difficult for me to sleep and I wake up numerous times at night.   To sleep, I have to force my mind to put myself in a place and feel what it would be like. I will not think about the Holocaust because it is too dangerous. I started out with being at Gettysburg along the Union line with the Confederates charging the line.

I switched to thinking about Jewish history. I focused on two times in Jewish history that were moments that changed everything.  Throughout history decisions are made, events unfold, that change the course of history.  I would suppose that God does not intervene, but lets man chose.  Man must choose the right path.  Once man chooses for better or worse, Hasgachah Pratis, divine guidance affects the future.

The two events I think about is when the 10 tribes broke off from the 2 tribes.  Two selfish kings destroyed Israel.   Once the split happened the northern 10 tribes would follow a different Torah.  The nation of Israel could never again be united.  Who stood up for the people, the congregation of Klal Israel?  NO ONE. There was no one with the power to change the course of history.   They could not go up against two powerful, corrupt kings.   It was the start of the end.  It took roughly two hundred years for Sanchreb to destroy the northern kingdom. In 2003+- Martin Brody took me to the UCLA Hillel for Shabbos morning Davening.  Rabbi Chaim Seidler-Feller spoke eloquently. He said the Jews do better with leaders that are Avos, father figures than kings.   How true.  This is what the Torah worried about and was concerned about shifting from judges and father figures to kings.

The other time of history I insert myself into,  is European Jewry.   Who could have changed the destiny of European Jewry so that the  holocaust would not happen.  1881 is given as the start of the destruction of European Jewry, when the Czar issued harsh decrees against the Jewish people.  Previously, anti Semitism which was terrible,  was isolated.   In 1881 anti-Semitism morphed into pervasive state sponsored anti-Semitism, which effected a country’s entire Jewish population.  Newspapers were enlisted in this growing and insidious anti-Semitism.  The Jews of the Pale of Settlement were forced to leave.   For 1881 to 1914, about 2 million Jews left, with 1.5 million going to America. This is tragically demonstrated in the movie, Fiddler on the Roof.  https://en.wikipedia.org/wiki/Pale_of_Settlement

In 1885, my grandfather wrote a short Sefer, Sholom Yeruhalim, and felt that the start of the movement back to Israel was the start of the coming of  Moshiach and was a worthwhile endeavor.  He tried to develop  an agricultural settlement for 1,000 families.  History could have changed but it did not happen and my grandfather had to abandon the project.  Tragic.

In 1894 Theodore Herzl was standing at the gates outside of the military base where Captain Alfred Dreyfus was dishonored. Upon seeing and hearing the cries of death to the Jews in liberal France, he clearly saw, like daylight, that there was no future for the Jews of Europe. Of course, he could not predict a holocaust, but he understood the Jews have three options; 1) leave Europe willingly, 2) be thrown out 3) live  in fear and live with pogroms..

Herzl was very charismatic and I believe put on this earth by God to help get the Jews to leave Europe and get into Israel. Herzl only wanted to help Jews.   God does not hurt the Jewish people by placing a decent man on the earth.

Unfortunately he failed to convince the Jews to move to Israel at that time when they could and go to the land that God promised is flowing with milk and honey.