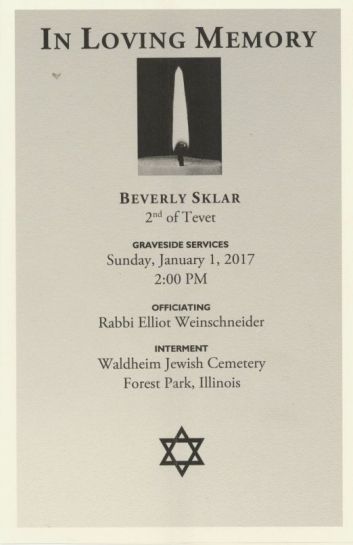 o the hospital on Motzei Shabbos two week ago. We knew that her time in this world was short and we did not expect her to last even for a day. She held on for two weeks and passed to the next world on Friday night a few hours into Shabbos. The Gemorah says that a person who is Niftar – passes to the next world on Motzei Shabbos is a bad sign. If a person passes away on Erev Shabbos or on Shabbos night it is a good sign, a sign that the person is righteous. Beilka as we know did not have
a sin. I was sitting a number of years ago with my son-in-law at the shul Bnei Torah in Indianapolis, davening. I picked up a Lubavitch Siddur with an English translation and read the English version of Raza D’Ecod. Even in English I barely understood the prayer. However, it talks about Hashem as the king, not sitting on his throne on Shabbos until the angels, even the destructive ones come up to heaven in peace. This is when Beilka passed to the next world, in harmony and peace.

Why did Beilka wait to pass away on Friday night, Shabbos? To bring peace to the family.

Beverly as she was commonly called,  was born on July 2, 1929 corresponding to the Hebrew date of the 24th of Sivan, 5689. It was a bright and sunny early summer day right before the July 4th holiday. My mother told me that Beverly was a beautiful child. It was a decent time for her parents, Sholem and Feigal Sklar. They were immigrants having come to America 5.5 years earlier.   Beilka’s father, our Zedi, did not compromise his religion.  He was the stereotypical Orthodox Jew in those years in America, working Monday through Friday and being fired the following Monday because he did not show up for work on Saturday.   Eventually Zedi found a decent job as a manager at the Seaman Burlap and Sack factory. He was able to keep Shabbos and did not allow his Jewish employees to work on Shabbos. He was able to provide for his family. Four months later on October 29th, 1929 the stock market crashes; and America and Zedi’s world changes dramatically. Extreme poverty hits America, people routinely committed suicide, soup kitchens were opened in every city. Zedi lost his job in the factory and life became extremely difficult. Zedi’s options became limited; life was closing in on him. Chapter 42, verse 21 says.

21And they said to one another, “Indeed, we are guilty for our brother, that we witnessed the distress of his soul when he begged us, and we did not listen. That is why this trouble has come upon us.”

Rabbi Mike Myers this past Shabbos said what is the meaning of Tzaruh. Tzaruh in English is translated as distress of the soul, anguish. Rabbi Myers said the world Tzar is to become narrow, when we feel everything is closing in on us and our options become fewer and fewer. We are trapped. This is what Yosef felt when he was thrown into the pit and this is what the brothers felt at that time when they were falsely accused. This is what the Jews have felt for 2,000 years in the exile until 1948, when the State of Israel was created and America became a place of refuge.

Beverly was born prematurely.  Bubi was pregnant with Beverly and was going up the steps of a bus.  The bus started moving, Bubi lurched forward and went into labor.  At birth she was perfect but did not progress.  Bubi and Zedi took her to many doctors and the last one told him, just like a cracked egg cannot be made whole, Beverly has an illness and cannot be made whole.  After consultation with Rabbis, Zedi decided to institutionalize Beverly and sent her to live with the nuns of Mount Saint Joseph, an order near Palatine, IL.  They took excellent care of her.  In those years, most kids with Beverly’s diagnosis institutionalized their kids.  Tragically, when Bubi and Zedi went to visit Beverly, as Bubi and Zedi were leaving, Beverly would cry out, Mama, Papa.

Karen remembers that ma would collect gifts that Beverly liked and put them in the butler pantry when we lived on Eastwood. Karen remembers going with ma to visit Beverly. It was a very long drive. This defined our mother, our grandmother, our great grandmother, our matriarch, Bubbi Jean. She watched and worried over Beverly. Ma went consistently to visit her. First with Bubby and Zedi, then with Bubby only, then by herself. Ma became a surrogate mother for Beverly. She worried about her, visited her,  dealt with the people who took care of her. This is when Ma had her own challenges in life. When Beverly became ill, on February 21, 2001 she went to Glencrest where Sidney and Lisa made sure that she was well taken care of. I believe that Beverly felt protected and secure knowing that ma was watching over her.

Beverly was blessed with a beautiful voice. She sang in a choir. I remember ma telling me that a big music or movie star came to visit and said that Beverly can be one of his singers. Karen told me that one of the toys that Beverly liked was a harmonica.

Beverly was named after her aunt, Beilka – Bella. Beilka was Zedi’s oldest sister. Beilka was the first of Zedi’s sibling to come to America. She came to America in 1909 and with her husband, brought the entire family to America. Zedi loved her. He named Beverly after her. Beverly became inexorably linked with her aunt. When Beverly’s name is mentioned, my subconscious stirs up within me and I think about Beilka, her aunt, Zedi’s hero. Unfortunately when Zedi came to America, Beilka had already passed away.

Our Beverly with her linkage to her aunt brings me back to Europe to 1909. Let us understand what Zedi saw in Beilka and then Beverly. Beilka’s husband Aaron (Archik) Tikotzky was the first of the family to go to America due to the grinding poverty, lack of opportunity, and pogroms of Eastern Europe in the pale of settlement. Zedi told me a story about Beilka. Her husband sent her a ticket to join him in America. Months before, Beilka, the oldest child of Avrohom Shmuel and Alta Sklar, asked permission from her father to leave Europe. Her father, Reb Avrohom Shmuel, did not answer for months. It was the morning that Beilka had to leave Krinik. Her father said, “min’a kint” come here. He hugged her and did not let go. They had to pry her from his arms. Zedi said that his father turned grey overnight. Beilka wrote back that she cried and cried and cried.

This is the love Zedi had for his sister that was transferred to Beverly and made everything that much more difficult.

Boruch Hashem, I had tremendous Siatta Dismaya to have Beilka being buried right by her grandmother the Yunge Bubby, Zedi’s mother, which we can see her picture. When Beverly was born the Yunge Bobby was still living and helped take care of her. My mother remembers that when Bubby had Beverly, the Yunge Bubby gave ma a bottle to settle her down.

Even though Sidney had graciously purchased a grave for her on Har Menuchos, I felt it would be more appropriate for her to be buried in Chicago by her family, at the foot of her grandmother’s grave. Sidney graciously gave me permission.

About 10 years ago Arnold Sklair, Victor’s son, mentioned that he had two graves available in the Krinik section by the Yunge Bubbe. When Beverly was taken to the hospital, I called Terry Taylor to get phone numbers and ask for advice. On Tuesday of that week, I called Arnold’s sister, Nani Karm and told her my dilemma. We talked and then we ended the conversation. Right after that conversation, I called the cemetery, Waldheim, to see if there any other plots in the Krinik section and was told that nothing close is available. Then I asked it there were any graves by her namesake. Debbie at the Waldheim office said that the Tikotzky family has three gravesites and that Arden Weinstein, controlled them. That itself was a miracle. For close to 20 years we looked for Beilka’s grave and only one year ago found the burial site.   This past summer we went with Meir and Pesach and afterwards with ma, and Tzvi, and after some searching we found her grave. We were full of joy, Ma’alah Simcha. Arden Weinstein is Beilka’s granddaughter, Manny and Sylvia Perl’s daughter. Sylvia is Belkie Tikotzky’s daughter.   Ten years ago I had Arden over for a meal. For the last 10 years, I call Arden about once a year and we never seem to reach each other. That Tuesday morning she answered right way and she graciously agreed to give me a grave.

About one hour later Nani called back and said that she spoke to Arnold, and that I can have the two graves by the Yunge Bubby. I was ecstatic, two of my cousins graciously stepped in for our family. Thank you Nani, Arnold, Arden, and Terry. May you be blessed with good things in life, both spiritual and physical

We decided to use the grave by the Yunge Bubby who loved Beilka so dearly.

During Pesach 1980, one Sunday morning Zedi tells me that we are going to the cemetery. We went and Zedi took me to the Krinik section of Waldheim where his family is buried. He showed me the gravesite of his mother, Alta Henya Rvika. There was a picture of her on her stone. Zedi took his sleeve wiped it across his mother’s faced from top to bottom and kissed his sleeve. He cried and then said, Momma, your great grandson is here. I am inviting you to his upcoming wedding.

Beilka, you will have a beautiful Kabblos Panim in the next work. Your parents, Zedi and Bubby will be there, with your grandparents, Reb Avrohom Shmuel and Alta, your namesake and her husband, Beilka and Aaron Tikotzky and Zedi’s grandfather who at age 28 passed away when he was Olah Regel to Kotzk.

I ask Mchilah for myself for not visiting you often, not giving you what you need. I ask Mchilah for the entire family. May you be a Melitz Yosher in for our family, especially your sisters, Bubby Jean and Shirley, and Altie. 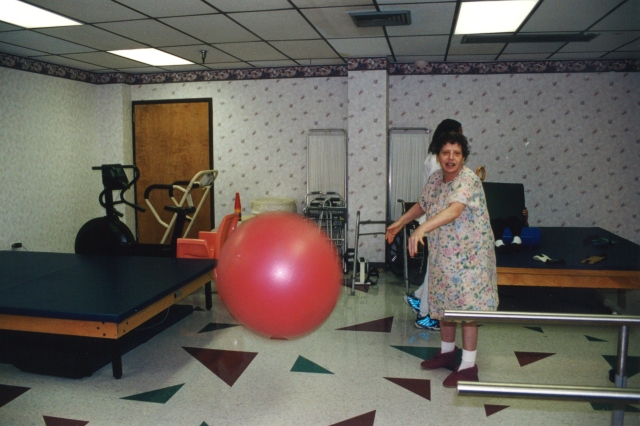