The Battle of Gettysburg was fought from July 1 – July 3, 1863. At 1:00 PM on July 3, 1863 Colonel E. P. Alexander, commander of the Confederate artillery on that day, gave the order and 150 Confederate guns open up against the Union line located approximately 1 mile away along Cemetery Ridge. The plan was to soften the Union defenses and then charge through the Union line and rout the Army of the Potomac.

This is a 6 minute portion from the movie, Gettysburg, which shows General James Longstreet discusisng the plans with his field General.s

This is a 4 minitue snipet from the movie showing Picketts charge:

This is another 4 minute snippet showing General Armistad ralling the troops.  He shouts,  “Give them the cold steel boys” and they go over the top.

At about 1:30 PM, the order is given and 12,500 Confederate soldiers emerge from the woods behind Seminary Ridge. They line up in formation about 1 mile across, bayonets fixed and glistening in the bright July sun. It was an amazing sight.
At about 2:00 PM, General Pickett gallops on his horse to General James LongstreLet, commander of Lee’s First Corp . Pickett asked Longstreet, “General, shall I advance?” Longstreet’s memoir recalled: “The effort to speak the order failed, and I could only indicate it by an affirmative bow.”[x] General Longstreet felt the charge was doomed and could not verbalize the order to charge. He nods and General Pickett gives the order to march forward towards the Union line. The charge is known in history as Pickett’s Charge. Watch the movie Gettysburg for a vivid view of the Battle of Gettysburg, Pickett’s Charge and see all the entire battle unfolding before your eyes. 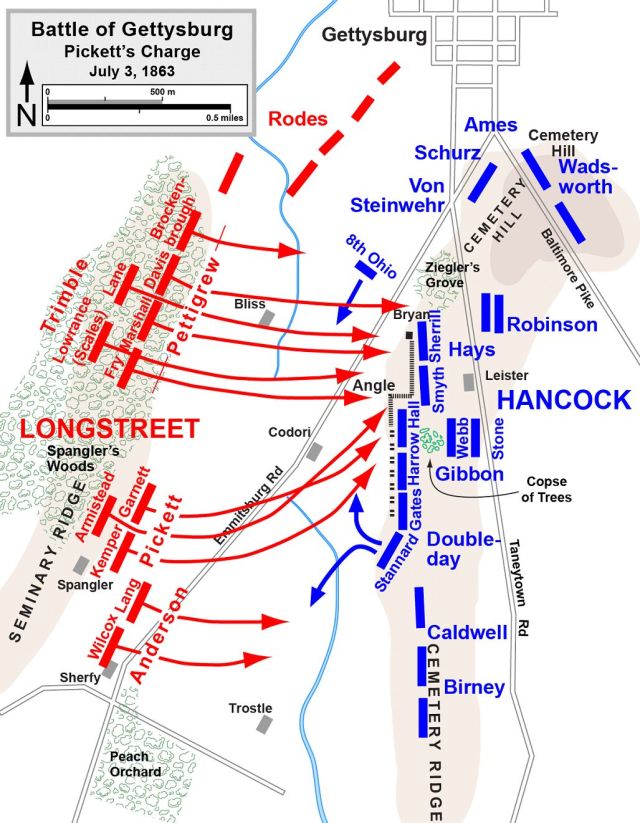 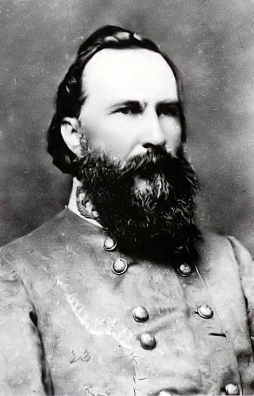 I visited Gettysburg one item in my life and that was the day after Nachum and Alyssa Caplan’s wedding in Baltimore. I wandered onto the battlefield with no clue what I was looking at. I asked someone walking by for information. He told me that he is of the Southern persuasion and comes often. He showed me the high water mark, the bloody angle, and gave me an outline of Pickett’s charge . He told me that it has been debated for years as to why General Lee ordered the attack, when they were going p against a dug in and fortified Union line. This Southern gentleman explained that General Lee was suffering from dysentery and his mind was not clear. The wisdom and failure of Pickett’s charge has been debated every since the war. Who was to blame? Who let General down? Was General Longstreet a traitor ? Years later, when asked why his charge at Gettysburg failed, General Pickett replied: “I’ve always thought the Yankees had something to do with it.”
William Faulkner commented on this moment before the charge of the possibilities, when all the hopes and dreams of the Confederacy can come true. Read it with a Southern drawl.

For every Southern boy fourteen years old, not once but whenever he wants it, there is the instant when it’s still not yet two o’clock on that July afternoon in 1863, the brigades are in position behind the rail fence, the guns are laid and ready in the woods and the furled flags are already loosened to break out and Pickett himself with his long oiled ringlets and his hat in one hand probably and his sword in the other looking up the hill waiting for Longstreet to give the word and it’s all in the balance, it hasn’t happened yet, it hasn’t even begun yet, it not only hasn’t begun yet but there is still time for it not to begin against that position and those circumstances which made more men than Garnett and Kemper and Armistead and Wilcox look grave yet it’s going to begin, we all know that, we have come to far with too much at stake and that moment doesn’t need even a fourteen-year-old boy to think This time. Maybe this time with all this much to lose than all this much to gain: Pennsylvania, Maryland, the world, the golden dome of Washington itself to crown with desperate and unbelievable victory the desperate gamble, the cast made two years ago.
– William Faulkner, novelist

I read this fascinating account of the battle by Colonel C. E. Alexander written by him in 1877. 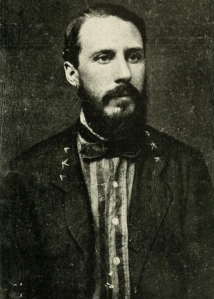 Dear Sir — I have your favor of the 27th ult., enclosing copy of letter from , giving an outline of his views of the campaign and Battle of Gettysburg, and inviting my comments thereon. I take great pleasure in giving them in the same frank spirit in which they are asked, and asking no one to accept them to whom they do not commend themselves, and not pretending to know every thing about it.
My rank and position during that campaign was colonel of artillery, commanding a battalion of six batteries attached as reserve to Longstreet’s corps; and on the field of Gettysburg I was placed by General Longstreet in command of all of his artillery on the field as chief of artillery for the action. As I had belonged to the United States Engineer Corps before the war, and as General Longstreet at that time had no engineer officers on his staff, I was frequently called on, also, during the campaign, as an engineer officer. I mention these facts only that you may form an idea of my personal opportunities of observation and information.