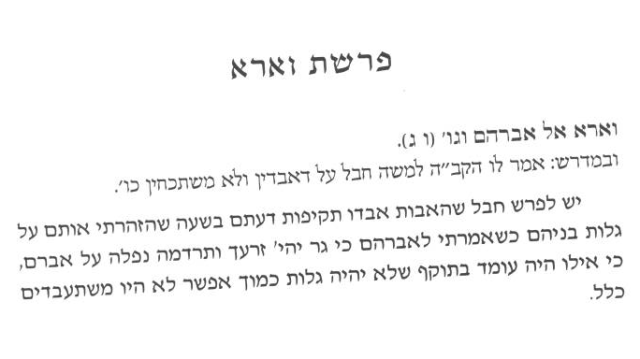 It is almost Shabbos and it is snowing here in Chicago.  It gives Shabbos a special look and feel.  I wanted to send everyone the above Bible thought  from the Kotzker Rebbe on this week’s portion.

The Medresh Rabbah says on this  exchange:   “God said to Moshe – woe on what we have lost and are not found, that Moshe . . .”  I do not have the full text of the Medresh here at work.

“It is a shame that the forefathers lost their strength at the time that I (God) warned them about the exile of their children.  When I said that your children will be sojourners in a strange land and right afterwards what happened, Avrohom fell into a deep sleep.  If Abraham would have stood his ground with strength and firmly told God (or argue),  no there will not be an exile, then it  is possible that the Jews would not have gone into slavery.”

The Kotzker is saying the God is saying this, lamenting the inability for Avrohom to defend his own children.

This is consistent with the Kotzker.  I spoke to Dr. Ungar and he told me that this is the Chiddush, the mindset, of the school of Pshisca, The Yid Hakodash,  the Rebbe Reb Bunim, and to the Kotzker, to challenge God.  He said that there is a Talmud in Gitten that talks about this very subject, and of our forefathers, only Isaac stands up to God.  The Bardichiver’s approach was to defend Jews to God in a sweet, cajoling manner, C’mon God, be good to  your kids, the Jews are good, do not punish them.

The Kotzker and his teachers, the school of Pshisca, was more brazen, upfront,  and challenging God. This is what Moshe did in our Torah portion.

I quickly wrote this so I apologize for sloppy wording.